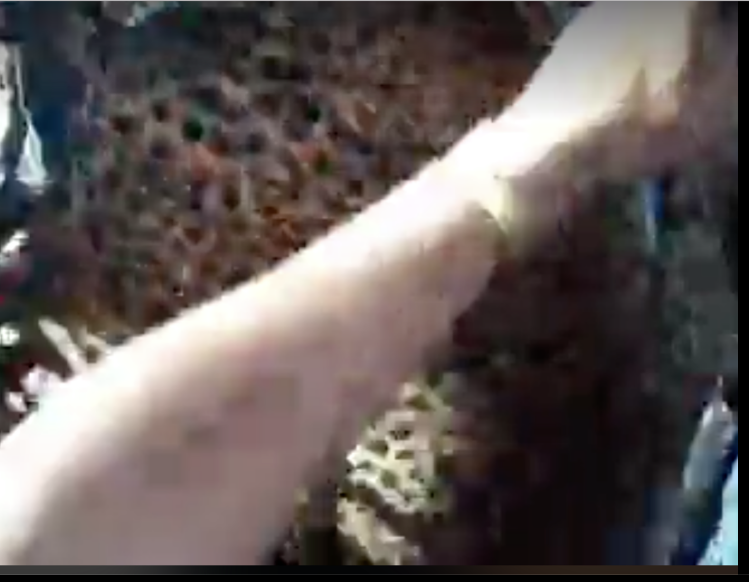 This screen shot is believed to be the moment of impact of an assault upon a Black Lives Matter supporter by an apologist for the police. Extracted from Boop Troop Eugene’s live stream.

Tonight, at Springfield Library, there were overlapping, opposing rallies: people defending the actions of police, and people demanding a redress of grievances against police. Many of the pro-cop rally participants were engaging “open carry,” clearly walking with their guns, including what appeared to be at least one person having an assault rifle of some kind. Some were members of Proud Boys and militia, according to our live streamer, who spoke to many.

Conspiracy theorists were present among those defending the force, including one who bizarrely accused Jewish philanthropist George Soros to be funding the Black Lives Matter movement.

Tense moments abounded, including staring contests between valiant counter-protesters and pro-cop participants making it abundantly clear that they were armed. At times, counter-demonstrators wisely deployed bicycles as shields and barriers.

Multiple fights broke out. Many were intercepted by our own live streamer, who also was targeted and personally threatened by multiple people, but who remained safe.

One of the attempts at violence by a pro-cop antagonist against counter-protesters did result in an assault.

The victim of that assault agreed to an indirect conversation conducted through a Boop Trooper who was providing emotional and logistical support to the survivor. She has authorized use of her name in this context.

Elizabeth Deffenbaugh recounts this about the assault:

“she hit me and tore my clothing”.

And yet, it was Elizabeth who was brought in by police:

she was “arrested and fingerprints taken”.

The charges brought against her were:

— Interfering with police; and

She requests “emotional support” and community presence at her court date, which presently is set for July 14, 2020, at Springfield Municipal Court, 230 4th St., Springfield, Oregon.

If something comparable happens to you, you will want to contact Bail Support. This dedicated team is here to help logistically, emotionally, and financially. The number for Bail Support is:

Thank you to Tre and all who kept the peace tonight. Stay safe, we love you. — Remy.