BEWARE: CARS AS WEAPONS AT DEMOS 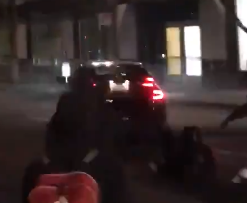 Screen shot from live video during last night’s assault. Last night, a driver used his vehicle as a weapon at a peaceful demonstration in support of BLM in downtown Portland. He circled through the crowd 3 times, deliberately speeding into protesters. He hit 3 protesters with his car. All 3 had to be transported for medical evaluation and treatment (1 in a car, 2 by ambulance). The assailant was apprehended after speeding off and then abandoning his car on foot.

Here is the live video and the Twitter thread from the videographer.

Here is an article about the perpetrator.

Here are links about other instances in which vehicles were deliberately used to try to kill protesters, historically and currently. In the first 2 listed cases, the peaceful demonstrators were murdered by the drivers.

Here are details about the pattern of the use of vehicles as weapons, including by police as well as right-wing extremists.

Please, Loves. Be safe. Have safety teams. Be vigilant for each other. Guard perimeters of demos. Always have an exit –preferably more than one– available. This is to avoid kettling, as well as to avoid drivers of potentially murderous intent, whether cops or other right-wing extremists.

First-hand accounts, photos, videos, audio of any attacks on demonstrators, by “law enforcement” or other extremists, may be submitted for publication in our blog and may be shared on our various other sites.