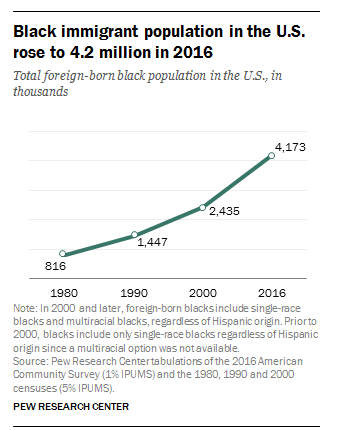 The black population in the US is often thought of in reductionist terms by white supremacists as one monolithic population, but is actually very beautifully diverse and evolving. As of the most recent tabulation of data by the nonpartisan Pew Research Center in 2016, 4,173,000 of the black individuals in the United States were first-generation immigrants:

Nearly half (49%) of these immigrants were from the Caribbean, notably Jamaica and Haiti, while 39% were from Africa, an increase of 15% compared to in 2000 (Ibid.).

Approximately 8% of black individuals living in the US in 2016 had at least one parent born outside the US, based on Census data.

For black immigrants, refugees, and asylum-seekers, the magnitude of oppression doubles, in that they are inundated with hateful attitudes and institutionalized discrimination both by white supremacists and other racists, and by those who resent, enact violence against, and legislate against immigrants.

Black immigrants are actively initiating and involved in actions of global significance to try to enact protections and end oppression. The family who were the initial plaintiffs in what became the ACLU’s class action lawsuit around “family separation” of migrant, refugee, and asylum-seeking families in the USA are a family fleeing political repression in the Democratic Republic of the Congo. (Source: Texas Tribune, 7/24/18.)

The immigration enforcement system is notoriously biased against and discriminatory towards black immigrants. This includes that they are more likely to have any criminal convictions — which already are disproportionately imposed on black individuals — cited as justifying detention and deportation. (Source: the NYU Immigrant Rights Clinic and the Black Alliance for Just Immigration, 2016).

Re-envisioning policing has to include re-envisioning approaches to what is considered a crime and to how to respond to the presence of people seeking asylum (or arriving for any reason) in this country (with and without granted paperwork) to include protections for black people newly arriving in the USA as well as those here for multiple generations.

Author’s note: It was very meaningful to me to post homages to World Refugee Day during and just after Father’s Day weekend, because people I know and their parents have been refugees from genocide. People dear to me and their ancestors have been:

— Killed in the Shoah (Holocaust);

— Had to find their Diaspora home in India;

— Had to be hidden in a neighbor’s attic in a child during a Pogrom (genocidal murderous mob);

— Had to flee Palestine after 10 generations there, as conscientious objectors to an occupying army, ended up in Hungary and then Romania, where they were jailed as refugees;

— Had to network to find a “sponsor” to come to the states.

I also personally used to do Spanish translation for the Immigration Physicals for Amigos de los Sobrevivientes (Friends of the Survivors), a group which helped those who sought Asylum here after political torture in Central or South America. And a place I lived, where neighbors included Holocaust survivors and escapees, was deliberately a haven for those seeking asylum. I grew up with friends whose families had fled political torture, from Russia to Burma. So the confluence this weekend of Juneteenth, World Refugee Day, and Father’s Day means a lot to me. It was also Solstice; apex of sunlight. May truths be illuminated. Thank you.