The Colonization and Weaponization of Streets: An Eyewitness’s Psychogeographic View 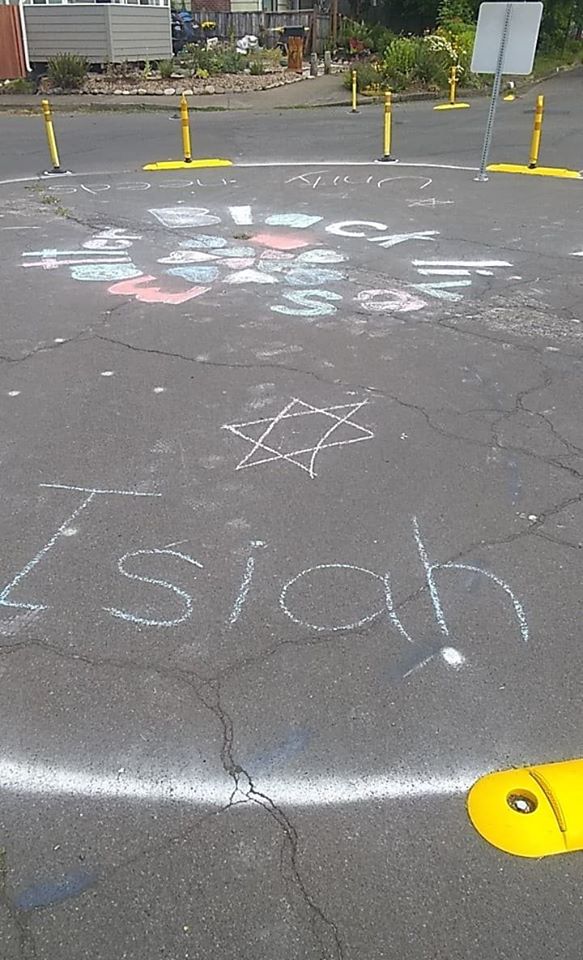 Following the Indigenous Solidarity with Black event, I tried to get over to Monroe Park as quickly as I could to meet up with the Pride event. Getting there, I realized they had already left; and not knowing where they were headed, I turned around to find other things to do with my remaining day. As I was walking, I spotted some people marching and some cars, heard chanting, and realizing it was a Black_Unity event, I hurried to catch up and provide any support and solidarity I could. It was the Children’s March headed back to the park where they’d begun. Less than ten minutes later, Isiah Wagoner was struck by a car.

The driver of the car, Travis Waleri, had previously been in confrontation with the march a couple of blocks back. Clearly the driver found an alternative route and managed to get ahead of the march. Both the march and the driver headed West then South. The driver, after going a block South, turned East and met back up with the march. The apartment complex in which the man was later located was West of where the driver met the march again -- meaning turning East took him in the exact opposite direction of his most likely destination. The car came to a stop at an intersection, which was being blocked as the children were going to be marching through it. As the car aggressively tried to push forward anyway, I headed toward Isiah to help him block the vehicle. The driver gunned the engine, Isiah was struck and splayed to minimize impact as best as possible, and the car roared down the residential street to get away. Without hesitation for his own well being, Isiah continued to work to coordinate both the safety of the children in the march and the pursuit of the vehicle that had just assaulted him.

Police and city executives’ reactions have been pitifully worthless. The mayor wouldn’t even acknowledge that Isiah put his body in front of that car to protect children, referring to the group simply as “protesters”. Chief of Police Skinner said it was “a tough time and a sensitive time,” as if the public’s reaction to racial injustice were a trend that would simply go away if ignored (never again ). This was horrific violence against Isiah’s body and an abrogation of his humanity. It was the act of a coward and should taste of ash and bile in the mouths of this community. Yet, I want to also address the psychogeographic violence of the act. This was not just a car weaponized against a body, but also a street used as a means of weaponizing that car; and I think this is critically important to understanding reactionary violence, how to neutralize it, and what it means to liberation struggles.

When thousands of people online say they hope protesters get run over, most aren’t signaling their actual willingness to commit vehicular murder – although the recent murder of Summer Taylor in Seattle proves that we must consider the potential veracity of all such threats. What most are doing is claiming the streets as a place that violence is permissible. They are shifting the meaning of a road from an asphalt line allowing ease of movement to a place where violence cannot just be expected but can be deserved. “If they didn’t want to get hit, they shouldn’t have been in the road” is a way of normalizing violence by constructing special rules and spatial relations pertaining to human bodies and streets. The idea of the road as a location of violence, along with the level of personal removal and protection allowed by a vehicle, combine to create a situation in which devastating, even fatal, harm can be dealt to human bodies, human selves, in a matter of mere moments. The suddenness and anonymity of this violence means that at all times, a protester must be wary of the road: It is a place of not just empowerment, but also grave consequences. This ever-present threat means no protest is peaceful (despite the actions of those actually involved), because the violence of the road still swells and looms.

Notable also is the decal flag of the United States on the car that hit Isiah. This car is not merely an assemblage of metal, plastic, glass; nor is it simply a means of conveyance. The car itself has become a reification of the ideology of its driver. It extends Waleri’s body, his power and capacity, and allows him to inflict grievous harm with a light pressure of his right foot. It takes the repressive social order, the colonial theories of race and power, and embodies them in the world, on the road. This car is no longer simply a car, but a representation and manifestation of the white supremacist system in which it operates. Flag, car, road: All are consumed and subsumed in a morass of racial violence; each a piece of the engine of hate that Waleri used in his attempt to sentence Isiah to death. Justice for Isiah.