Wall of Moms vs. All Lives Matter at "Solidarity with Portland" demo in Eugene 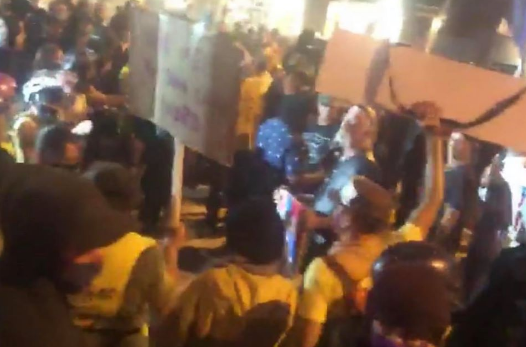 I was live streaming at the “Stand in Solidarity with Portland” event in Eugene, Oregon yesterday. When I first arrived, there appeared to be a standoff between the original protesters and a group of protesters with the “all lives matter” group (“ALM”).

Those gathered for the event were yelling toward those there for ALM, while keeping a tight line, to back them away from the planned protest. I was highly concerned, not only for the safety of the protesters, but also for myself.

As I walked through the counter protesters and their shields, the first thing I noticed was the amount of weapons attached to the shields. Every shield contained screws pointed through the front -- making the ostensibly defensive weapon into something that could be used to gouge someone when wielded like a battering ram or hammer. All but a few counter demonstrators held a weapon, in their hand or attached behind their shield, where they would not be seen by their intended targets. Among the weapons I saw were everything from bats, to wasp spray, pepper spray, tasers --and, yes, even guns. Another of our livestreamers found live ammunition that had been dropped by one of the counter demonstrators.

The ALM protesters, at least those I personally witnessed, did not seem to me to have shown up for a peaceful counter protest. I felt as though they purposely agitated a group of marginalized protesters in order to incite violence. I don’t know what their true intent was. One of the ALM protesters asked that we all unite. I cannot imagine that showing up with weapons and (prior to my arrival) firing a gun into the air is a show of uniting.

The “Wall of Moms,” a group of peaceful demonstrators who formed a wall, a protective barrier between those chanting Black Lives Matter and those chanting All Lives Matter, continued to walk toward the counter protesters, telling them to go home. This was an assertive presence, but they did not incite violence toward ALM. The Moms just positioned their bodies to form a wall and asserted the fact that the people whose presence was experienced as intimidating were not welcome to continue to marginalize them. It was a beautiful sight to behold, the way they united to assert themselves.

This protest started as a “Stand with Portland in Solidarity” event at the federal courthouse in Eugene, Oregon and then moved to the jail, where the Lane County Sheriff Department quickly informed them that this was an “unlawful assembly,” and that if we did not disperse, they would use chemical weapons, and we may be arrested.

At this time, the march moved on from the jail and headed through downtown Eugene, back toward the federal courthouse. During this portion there was some minor damage to some windows by a few individuals, no one attempted to enter the buildings, and some of the protesters were avidly attempting to stop the incident.

As the protesters approached East Broadway and Hilyard, you could see the flashing lights coming from the west. At this point the cops headed back past the federal courthouse and back toward the downtown area, where the protesters used what they could to block and slow the police. It was at this time the police informed us that, “This is the Eugene Police Department. This is an unlawful assembly. You are commanded in the name of the State of Oregon to disperse. If you do not immediately disperse, you will be arrested. Failure to comply with this lawful order may result in the use of tear gas or impact munitions against you.” This often-repeated order usually also gave a direction in which to disperse, which kept changing. Sometimes they’d say south, sometimes west, sometimes varying it with whether someone was “credentialed press”. It was confusing and chaotic and utterly unnecessary. The crowd was fully peaceful and moving away from downtown by this point.

During the course of interaction with the police they used both pepper balls and tear gas. They also made multiple arrests, including of a 14-year-old female minor, whom they brutally attacked on live feed. The force used against the minor appeared much more excessive than would be necessary to gain control. I also noticed that the police chose to use the pepper balls and tear gas only while we were in neighborhoods, and not in open areas with businesses where the gas would have had a harder time finding its way into a building. This was a clash between the police and those marginalized by laws that create a harsh environment, not only for the residents, but also for the police who are tasked to enforce them.

From the couple of interactions I had with police, some appeared to be on a power trip and seemed to enjoy what they were doing! Others appeared to be there only because they were obligated to. I could hear in their voices the disdain they had for what they were doing. This to me shows a huge difference from what we saw back at the end of May, beginning of June. This shows that maybe our messages are starting to get through! And it shows that the need for unity and protections for the marginalized are starting to be seen by those who need to hear their voices. For this reason, we all need to join together and keep fighting in solidarity!

This piece has been lightly edited by a Boop Troop Blog Editor with the author's consent, without altering content or tone. The screen shot is deliberately blurry to obscure faces and is from Crystal's own live stream. This blog post, including this image, is the intellectual property of Crystal Thornbrugh.