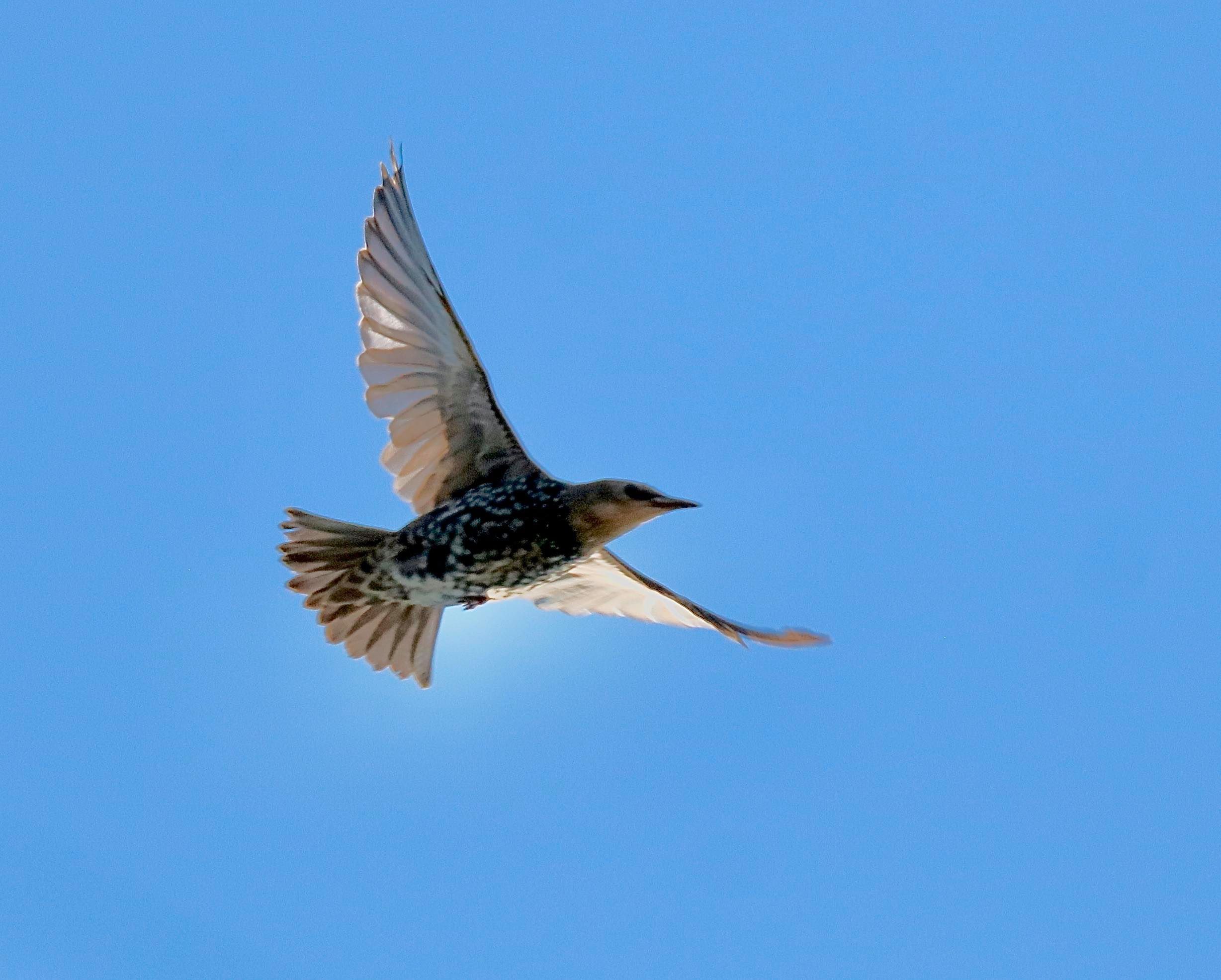 Starling in flight at the wetlands, Photo by Sunny September, shared with enthusiastic consent.

I watched a beautiful video this morning showing the murmuration of a flock of starlings with Pachelbels Canon in D Major in the background. It got me thinking about the ability of creatures to act as a living unit without verbal, visual or any other obvious form of communication. Birds fly in murmurations, fish swim in schools, bison graze in herds and so on, doing all through some form of telepathic communication that we humans, with all of our science and education seem to hardly understand at all. This in turn brought me to thinking about mass consent of large numbers of people in times of crises. One of the pressing questions and difficulties of this particular crisis, the pandemic, is the fear of over-reaching government and what appears to be the very real need for human cooperation, and so back to the birds, fish and bison.

I’m sure we have this ability, to flow together in wordless harmony and grace; we see it in dance and on the bustling sidewalks of large cities, so we know it exists for us but we have lost much of it due to our other abilities, particularly our abilities to communicate verbally and visually because, with our abilities to communicate verbally and visually, we also developed an ability to lie. This may be one of the greatest differences between humans and the other animals, our ability to twist the truth.

There is no lie or deception in the communication that happens between animals when they act in this way, be they birds, fish, bison or humans.

There is what could be called “hive-mind”, if I’m using that word properly to describe a natural and guileless form of communication and there is what we might call “group-think” to take a word from Orwell. The one is natural and the other is contrived.

The birds, fish, bison move without any apparent fault or mistake, they don’t fumble and bang about or cut each other off and crash.

Have we forgotten some of our useful abilities in this grand adventure of human communication techniques? Have we replaced hive mind with group think? How do mass media and social media effect our ability to think honest thoughts together and act in accordance to crises or just day-to-day life?

The crisis we are now experiencing is multifaceted. It’s a health crisis, economic crisis, environmental crisis and political and social crisis all rolled into one. With government, corporate media and internet providers controlling so much of our information they are easily able to control what we see and hear and therefore much of what we think and feel. With this much control they are just as easily now able to control much of our behavior, how we move and to where we move, what we buy and what we sell and how we respond to events and which events we respond to.

This is the perfect situation for those who control the government, the economy and us, the people. Group think with its immense amount of control is at its finest moment. Add to that the very real and ready ability to enforce group think, when the psychology behind the words doesn’t work, when some of the herd panics and flies-off out of the mandated pattern and starts crashing about.

In this crisis the challenge for humans, if they wish to remain human, is to resist group think and to act out of our own innate ability to perform right action. Groupthink will turn us into the automatons we have always been so afraid of becoming. This ultimately has been the struggle of civilizations throughout the ages, magnified now by modern technology, population growth, and the rise of global empires. There will be no democracy, no self-searching or idealistic behavior and no freedom of any kind be it, social, economic, political or religious if group think takes the reins.

The hive-mind works in a different way; freedom of thought and action is perhaps the most essential element of hive-mind because it’s in that freedom of experience, that freedom of feeling and awareness, that freedom of mind and decision and choice that we are able to tune into the rhythm of life that is our natural best advantage. We cannot perform hive-mindedness when chained to the limits imposed through authoritarian-based group thinking.
I cannot, nor can anyone else, tell a person how to think inside, or should we say, on the outside of hive-mind. I do not, nor do they, have the words for it, for words, no matter how wonderful in their ability to describe and explain are never the thing itself. We see masses of humans who are quite capable of acting in their own self-interests or in the interest of the society at large. People who are not deceived by outside forces are easily able to figure out the necessary steps, movements, and actions to take that will ensure not only survival but simpler things as well like how to get along at, and during, huge public events and gatherings. Though I wasn’t there, Woodstock comes to mind.

We can, I believe, tap into the hive-mind by and through that thing that, if you’ll pardon me for using a controversial word, that thing we call faith. Watch the birds, we can sense a bit of what I mean as we observe them moving together through space and time.

We can access this faith by opening those things we call heart and mind in a fashion where they become one unit working together, flowing, twisting, and turning like a flock of starlings. We can move towards that opening and joining of heart and mind by meditating on that which we are and on that which we might become. We can build on our faith by practicing the movements of free and tuned-in, turned-on creatures. It’s in the moving that we learn the steps, not in orders and instructions, but we must step mentally and physically into the dance. In dancing, in trusting ourselves in our moving together, we can practice another level of awareness that brings us into the realm of hive mind, based on a communication that exists between us which does not depend on words that are often inadequate, and just as often misused, by those who have no faith in things outside their own power.

In this faith our words become music, like the true sounds of life, like the sounds of lovers and babies and the sound of real pain and joy, the things we all must experience, either alone, together, or as someone’s automaton.

This article by Scott Owen was originally published in Counterpunch 3/26/20, and was shared with Boop Troop Eugene with the author's enthusiastic consent.

For more gorgeous nature photography by Sunny September, go to: