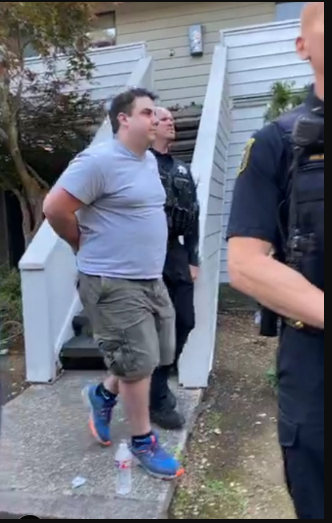 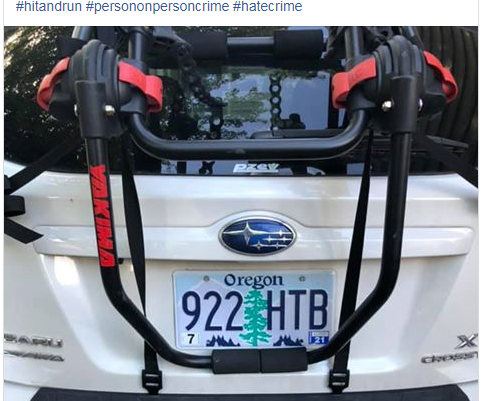 The driver of this Subaru, at 15 to 20 miles an hour, deliberately drove into Black_Unity organizer, Isiah Wagoner, so hard that his body spun and almost entirely went under the vehicle. He was taken by ambulance to a hospital. Isiah intends to press charges, but for over an hour, police refused to even detain the perpetrator, who was identified and located by activists — not by cops. Community action found the perpetrator — not the cops. UPDATE 10:55 pm: Ultimately — they only gave a facade of arresting the perpetrator. He was released without being charged, witnesses are telling BTE.

Multiple witnesses have reported in live streams that this was a deliberate act of vehicular assault, conducted in front of the survivor’s young daughter, and in front of many other peaceful children and parents, who had gathered for a beautiful and serene educational event at another nearby park, as they were walking back to Sladden Park, in the Whiteaker neighborhood, in Eugene, Oregon, USA.

The perpetrator sped away then parked and ran out of his car. An emergency action ensued. Activists from Black_Unity know their rights to film actions of police. Activists found where the perpetrator fled to, and they were holding a vigil to demand his arrest, while live-streaming the vigil, documenting the visible reticence of police to hold the perpetrator accountable. The witnesses described the cops as holding “friendly conversation” with him.

The activists put out an emergency call for media and additional witnesses of police conduct at the site where presently they were standing firm about their rights to document the police. They also named the right to citizens’ arrest if the police failed to take action in this instance of a white man using a vehicle to assault a black man in front of dozens of witnesses. The location at which they requested witnesses, media, and support is the Rivers’ Edge Townhouses between Sladden Park and the Willamette River at 945 Lewis Street.

Upon arrival of additional media, it is possible that made a difference, as the officers apparently presently have the perpetrator in their vehicle, albeit still at that location.

Stay tuned to Boop Troop Eugene News Blog for additional information regarding charges and any actions to bring justice for Isiah.

Added 12:50 am: Email the DA, Patty Perlow, to demand the perpetrator is charged, at this email.

Read about prior incidents of vehicular assault against activists in this prior Boop Troop Eugene News Blog here.

If your own kids were traumatized witnessing this incident, there are suggestions and resources for how to gently support and speak with traumatized children here.

Be safe. We love you.