Research Tools on Police Violence. First of a series of articles for BoopTroopEugene News, by #5 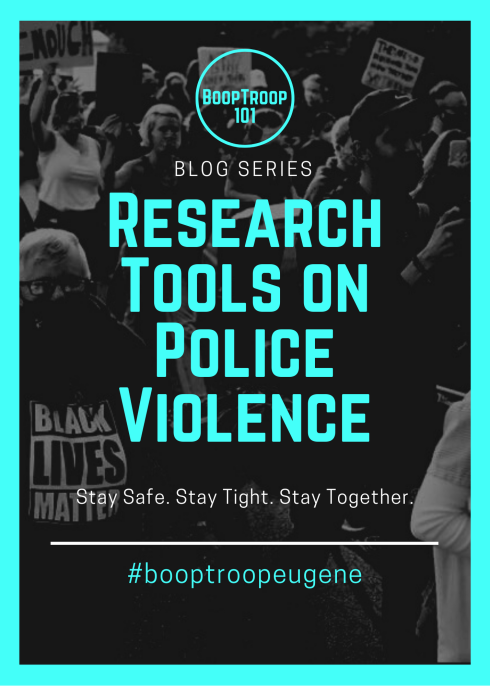 In this series of news briefs, I will be sharing articles and databases you can use to do your own research, for articles, press releases, and your own education.

Our first focus is on:

In an era in which only first-hand, live-streamed accounts are trusted by many activists, advocates, and allies, it is imperative that we share with each other tools that can help us each become our own researchers. When even CNN is condemning Fox “News” for resorting to Photoshop to contrive allegations of mayhem amid the peaceful new autonomous community that has arisen adjacent to Seattle (CHOP, Capitol Hill Occupying Protest; formerly known as CHAZ, Capitol Hill Autonomous Zone), we know that we need to use our own eyes and ears on the group, our own fingertips on portions of the internet on which we can rely, to get a sense of reality.

Toward that end, the following may be of utility. Tragically, a content alert applies.

Within these records are 22,924 investigations re: excessive force;

2,307 cases of domestic violence by officers; and

2,227 known cases of perjury (cops lying in court and/or in police records).

This documentation was engaged by USA Today and the Citizens Police Data Project of the Invisible Institute of Chicago.

Among the ways you may use these data is to SEARCH, BY NAME, BY POLICE ORGANIZATION, AND/OR BY STATE, TO SEE WHO HAS BEEN DECERTIFIED — WHOSE CRIMES, AS A POLICE OFFICER, HAVE RESULTED IN THEIR LOSING THEIR CERTIFICATION AS A COP AT THE GIVEN LOCATION. Note that there are MANY cases of people getting rehired — often multiple times — after losing jobs in one location. Ever wonder whether anyone on your local force has such a history? Now you know where to look to find out.

Below are the links you need.

Running a search for “Oregon” reveals 5 pages…25 names on the first page alone.

If you do engage any of your own research, we at BoopTroopEugene News would love to learn from your work and if possible, share it in our blog. Thank you.

Take care of yourself, and read this in a safe setting.