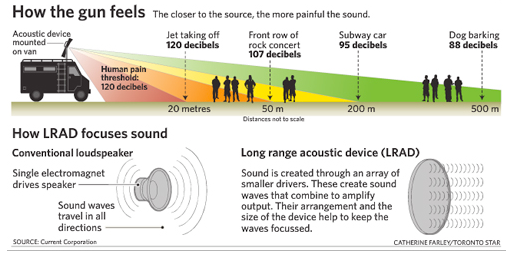 Below are the best resources I have personally encountered so far about:

–what LRAD sonic warfare is;

–the damage it can do;

–where it has been used;

–what you can do in the face of it.

LRAD stands for long-range acoustic device. These are also known as “sound cannons”.

LRAD among the types of devices we are referring to, when we say we want to demilitarize the police. These are generally obtained from the military, and they are a military tactic (albeit initially used on the seas to deter pirates).

Police departments have been using these specifically against Black Lives Matter protesters since at least 2014, when their use by NYPD against BLM at a demonstration, after Daniel Pantaleo, the NYPD officer who murdered Eric Garner by illegal chokehold, was not convicted, resulted in a federal law suit that has been bouncing among courts ever since.

Here is the backstory on that court case.

Here are details about the use of LRAD in Portland, Oregon.

Here is a bit of the science behind how LRAD works.

Here is the link from which I got the image above:

Here is a user-friendly ‘zine all about LRAD, for activists.

Here is an illuminating article from Popular Mechanics:

Please be safe. Just in case: Consider getting sound-canceling headphones, such as these. They will not eliminate LRAD but might help save your hearing as you try to evade. The most important thing to know is that the sound waves will be linear. Do not run toward nor directly away from them. Run to the side to try to escape the cone of impact.

Here is research into how to build a shield to deflect LRAD.

Here is an article on that research.

Interested in more info on why and how to demilitarize policing? Stay tuned here, and check this: